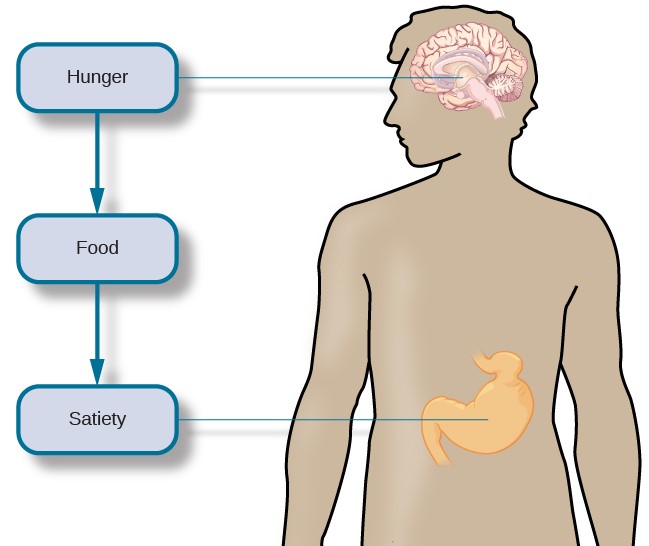 Hunger is a feeling based on different reasons:

1) Stomach fullness, leading to satiety feeling. This is mainly achieved by consuming fibrous carbohydrates, such as salads and vegetables. Fiber is capable of binding water, thus preventing the feeling of emptiness.

2) Serum glucose (blood sugar levels).This is directly related to insulin levels, released by pancreas. Insulin sensitivity improves the entrance of glucose into cells. In this way energy production is ensured. Unlike insulin resistance where glucose doesn’t enter cells, thus floating into circulation. As a result this triggers pancreas for insulin release, leading to hypoglycemia and fatigue, hunger.

In order to keep a steady blood sugar levels we have to consume fiber, EFAs and lean animal protein. Chromium picolinate can help to stabilize serum glucose  levels. On the other hand, we must avoid hyperglycemic carbs and refined sugars, leading to insulin spike and insulin resistance respectively.

Fasting over four hours will kick gluconeogenesis, leading to breakdown of contractile muscle from cortisol (hunger is a physical and mental form of stress).Cortisol in the short term is a fat burning hormone, but when chronic cortisolemia appears, the splanchnic fat accumulation occurs, leading to insulin resistance. Repeated gluconeogenesis will kick insulin release from pancreas, since glucose production by amino acids has to be balanced by pancreas.

We therefore realize that prolonged fasting may not be a good idea, leading to insulin resistance and increase in midsection, while breaking down muscle tissue from limbs. This look resembles the classic Cushing syndrome, based on cortisol release from adrenals.

We have to understand that eating after several hours of fasting will lead to insulin spike and lipogenesis (fat storage by LPL enzyme).These fluctuations in blood sugar levels (prior and post meal) are certainly not healthy for serum glucose homeostasis.

Intermittent fasting (IF) may improve insulin sensitivity, as long there isn’t caloric surplus and poor quality of calories. In the bottom line it is not just about a matter of calories calculation, when our primary goal is body composition (muscles versus fat). Body weight and scale tells half of the truth, while mirror reflects on reality, as well with midsection measuring (fat stores).

Ketogenic diets (KDs) and ketosomes are suppressing hunger and provide satiety. By burning visceral fat we also improve insulin sensitivity and avoid cravings based on hypoglycemia.

In general leptin is released after a meal, while its concentration is increased few hours after a meal. Thus organism has a homeostatic mechanism by which it regulates hunger and satiety feeling.

After each meal insulin concentration rises. Basically carbs provide the feeling of satiety, but this takes place in the short term, through hyperglycemia. Soon after based on glycemic index (GI) and insulin spike, hypoglycemia or crush of blood sugar levels will occur. We all remember our parents ‘advice: ‘don’t eat that cookie before lunch time’ ‘It was an anecdotal advice that eating something rich in glycemic load will stop appetite; at least in the short term. Because half an hour later we’ll feel drained and hungrier than before. This is how important is GI and glycemic load factors are for optimizing insulin, glucose and appetite as a result.

On the contrary, a rich protein diet will provide the feeling of satiety. This is not only due to the leptin-protein correlation, but also the fact animal protein is hardly digested. Thus it remains in GIT for several hours, depending on fat content (red meat versus fish).

Another reason is that protein doesn’t have such a great impact on pancreas, based on the fact animal protein is zero in carbs but also contains fat, known to lower insulin. During fasting period, insulin is low (responsible for fat storage), while glucagon is high (fat burning hormone).

Moreover, somatropin also elevates, responsible for beta oxidation of adipose tissue. However concentration of hunger hormone Ghrelin is also high. Ghrelin is released by the fundus of stomach and actually it is known that ghrelin is related to growth hormone.

As a matter of fact, certain secretagogues of GHRH (GH boosters in other words) are ghrelin’s analogues. This explains the fact they directly stimulate appetite and hunger.

Under viral infections our appetite drops to zero levels. This is based on the fact inflammatory cytokines, such as prostaglandins, elevate leptin’s concentration.

Another important fact is that the higher levels of adipose tissue, the more leptin there should be. But obese people who already develop insulin resistance (by omental, or visceral fat), also develop resistance to leptin. Therefore their satiety-hunger mechanism is messed.

As well known a major factor for muscle growth is caloric load. This situation is really nerve wracking and may lead to plateau. As Jay Cutlet once told us in a seminar, held in Greece (2016), my biggest concern while I was an Olympian athlete was to constantly eat every one or two hours, day in and day out. Eating constantly in bodybuilding may be not pleasant, especially when you don’t feel   hungry. Bodybuilders try to increase their appetite by using digestive enzymes and try to blend their food into liquid form.