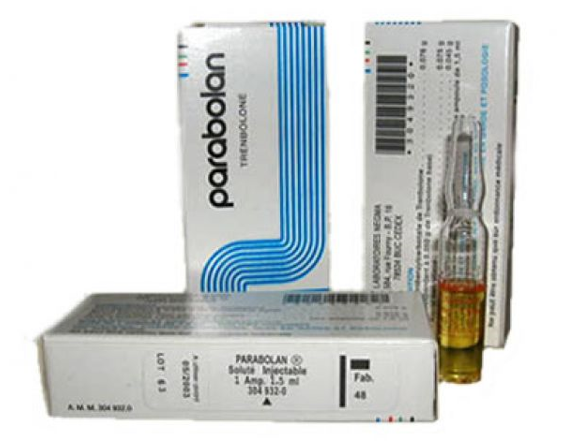 Trenbolone is a 19-nortestosterone derivative with a chemical structure resembling nandrolone.
It is of high androgenicity and anabolic activity (about five times higher that testosterone), ideal during precontest preparation and dieting.
Trenbolone has a positive effect on fat burning and catabolism of adipose tissue (beta oxidation).
It is a progestin, leading to progestational activity which raises prolactine in the presence of estrogens.

Trenbolone is available in slow, intermediate and fast acting injectable esters (enanthate, hexahydrobenzylcarbonate, acetate).
Acetate and enanthate forms are not for human use, as they are used in veterinary medicine for cattles.
Only parabolan (trenbolone hexahydrobenzylcarbonate) was available for human use, manufactured by Negma pharmaceutical company in the 80’s and was discontinued in 1997.
Trenbolone enanthate (slow ester) releases 70% of the substance, while the intermediate 80%.
Fast ester has a short half life and highest degree of assimilation, even higher than of testosterone propionate (90%).
However, for the past five years there has been available in the market, a suspension form (trenbolone base 50mg) with an acute absorbability (100%) and a half life of 24h.

The authenticity of the fast ester is noticed by the appearance of the typical ‘’tren cough’’ soon after the intramuscular injection.
High concentration of trenbolone acetate, along with the presence of benzolium (alcohol with distinctive smell) can directly irritate lung tissue.
These substances cause an asthmatic crisis with bronchospasm and symptoms of paroxysmal coughing, wheezing, rapid breathing or chest pressure.
Immediate use of bronchodilators such as inhaled salbutamol is necessary.
Another factor that is responsible for ‘’tren cough’’ is the introduction of a small amount of oil into small blood vessels, or the lymphatic system during intramuscular injection.
Trenbolone is known to cause a reduction of aerobic capacity.
Based on the fact that it is a “cortisol crusher”, trenbolone stimulates inflammation.
Therefore, inflammatory cytokines-prostaglandins (PG’s) in the respiratory system trigger bronchospasm and infections, leading to poor respiratory capacity (VO2max).
On the other hand, the “cortisol crush” makes trenbolone highly anabolic.
As known, cortisol (glucocorticoid) is considered to be a muscle catabolic hormone.
Trenbolone is considered as a precontest anabolic steroid, since there is no water retention and edema effect, based on aldosterone’s and cortisol’s inhibition from the kidneys.
On the contrary, cortisol’s crush leads to joint discomfort, since cortisol is known to mask pain and sooth joint aches.