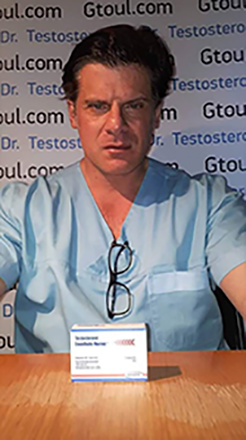 As a doctor who follows Testosterone Replacement Therapy (TRT) for the past five years, my belief is that TRT is ruining big pharma sales.
You see, testosterone is a cheaper drug compared to other medications, that treat some of the symptoms that testosterone can:
Insulin resistance/DM2, anemia, arthritis, depression, erectile dysfunction, osteopenia, dyslipidemia, obesity/MS.
Of course each medical treatment has potential side effects, but with every treatment we always should balance the pros and cons.
The point is that men cannot live without testosterone, when they are hypogonadic.
They can surely live without growth hormone (GH) for instance (under GHRH deficiency), but nothing can replace the main androgen (as women are suffering through menopause, living without estrogens).

However the plethora of benefits TRT provides in several tissues makes it to become a wonder medicine and apparently this is not acceptable by the pharmaceutical industries.
Testosterone was given a bad name out of its abuse from bodybuilders and this is how MDs became skeptical, suspicious, and full of prejudice.
Testosterone however is a familiar hormone being produced and not a synthetic derivative like anabolic steroids instead.

It is a fact that Selective Serotonin Reuptake Inhibitor antidepressants (SSRIs) are widely prescribed in depression and along with statins are the top medications prescribed.
Does andropause lead to depression? Of course it does!
Absence of androgens and mainly DHT lead to low self-esteem and low sex drive.
On the other hand, deficiency of testosterone will affect neurotransmitters like serotonin (the joy hormone) and dopamine (feeling of reward).
Psychiatrists widely prescribe medications that elevate prolactin and affect sex drive, leading to anorgasmia.

So the problem is partially treated and not from where it initiates
In the bottom line, medical society does not want testosterone. Why? Because it is cheap and the solution for many diseases.
Consider that menopause and HRT in women was widely spread since the late 80s, while gynecologists and internal medicine pathologists were responsible for this.

On the contrary andropause is a taboo subject, because it is linked with erectile dysfunction that interferes with a man’s ego and pride.
Unfortunately men seek for help to urologists, who prescribe Phosphodiesterase type-5 (PDE-5) inhibitors for treatment of erectile dysfunction, but not testosterone.
Again this apparently doesn’t solve the problem from where it origins.
Another reason is the so called “hormone phobia” meaning the fear of hormones, based on ignorance.
Hopefully the last decade we are aware and the wave of HRT in men spreads worldwide, most probably because it’s part of age management that looks quite trendy nowadays.
In the bottom line, anti-ageing and age management strategies are a specified field in modern medicine, that wasn’t part of academic lessons in classic medical schools.
This engages parts of endocrinology, pathology and urology.

The most important thing is not to go just by the book, but having personal experience and walk your talk.

In this way you become irresistable, because you are more than a regular MD and more of another bro scientist who preaches online