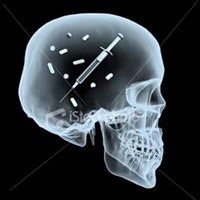 The speculated ”roid rage” deals with the consequences of performance enhancing drugs (PED’s) & androgenic anabolic steroids (AAS) abuse in the mental status and psychology of bodybuilders.
The psychopathological aspect of PED’s /AAS neurotoxicity and dependence can present as a chronic-long term adverse effect, or in the form of episodes-crisis adverse effect.
Apart from the fact that bodybuilders have an external appearance way freakier that the average individual, the combination of an extreme low carbohydrate, low caloric diet, along with exhausting training along with chemical enhancement abuse, would make an explosive combination, leading eventually to a psychopathologic behavior.
Roid rage has been associated with various psychiatric manifestations such as sleep disorders, anxiety, mania, depression, irritability, aggression, violence, suicidal behaviour, psychosis, confusion and delirium.
It’s quite common that heavy steroid users have a lower threshold of patience and lose their temper easier, making them to act spontaneously, driven by their instinct without thinking logically.
Long-term abuse may lead to the development of a dependence syndrome and withdrawal symptoms on cessation.

It is well known that brain has androgen receptors (AR) that correspond to different chemical substances, able to cross the blood brain barrier and the placental barrier as well (17 β trenbolone).
As a result, some anabolic steroids with a high level of androgenicity, for instance fluoxymesterone (800 androgenic index) or trenbolone (500 androgenic index), have the ability to bind tighter to the AR.
It has being demonstrated that neural junctions transmit signals much faster, reflecting directly to serotonin, dopamine metabolism.
However, this is not exclusively linked to the androgenic activity of a particular AAS.
Nandrolone decaonate, a 19nortestosterone derivative AAS, prescribed medically for the treatment of osteopenia has been associated with several behavioral disorders in supraphysiological treatment doses (>200mg/15 days).
Therefore, on-medical use of AAS carries neurodegenerative potential.
Recent animal studies have shown this AAS effect, ranging from neurotrophin unbalance to increased neuronal susceptibility to apoptotic stimuli.
Experimental and animal studies strongly suggest that apoptotic mechanisms are at least in part involved in AAS induced neurotoxicity.
Furthermore, a great body of evidence is suggesting that increased cellular oxidative stress to cerebral neurons could play a major role in the pathogenesis of many neurodegenerative disorders, such as manic-depression, or bipolar effect.
Several different studies suggest that a wide range of psychiatric side effects induced by the use of AAS is correlated to the severity of abuse in terms of dosage and time period.

In another study, 17β-trenbolone was administered to adult and pregnant rats and the primary hippocampus neurons.
Hippocampus is a certain area in mesencephalon, belonging to the limbic system, associated with behavior.
17β-trenbolone accumulated in adult rat brain, especially in the hippocampus, and in the fetus brain. 17β-trenbolone induced apoptosis of primary hippocampal neurons.
Therefore, 17β-trenbolone played critical roles in neurodegeneration.
Large doses of trenbolone and bodybuilders-powerlifters-strongmen, which are exposed to 17β-trenbolone by various ways, are all influenced chronically and continually.
As a result, it is not only a matter of dose, but duration as well.

Cerebral MRI examinations of persons who abused chronically AAS, showed enlarged the amygdala, a certain area of mesencephalon belonging to the limbic system.
Amydgala along with hippocampus determine the emotional status.
It’s important to mention that metabolism of glutamic acid was also increased.
As well known, glutamine is an important amino acid, taking part in brain’s metabolism.
Moreover, it was demonstrated by psychiatric tests that chronic AAS abusers, suffered from short term amnesia.

Some other anabolic steroids, such as methandrostenolone-methandienone – a methyltestosterone’s derivative – aromatize.
Aromatization is the production of estrogens, by activation of aromatase enzyme in different tissues (breast, liver, adipose, brain).
Estrogens are linked directly with neurotransmitters, such as serotonin, thus improving mood.
As a result, dianabol will induce a euphoric effect and addiction is highly to occur, both mentally and physically.

On the other hand testosterone is a natural existing hormone, which males produce on a daily basis.
It is not a synthetic derivative like AAS.
However, investigations concerning the testosterone’s effect in human behavior revealed that increased levels of circulating testosterone in serum was associated with significant increase in anger and hostility.
Testosterone undecaonate, enanthate, cypionate are different types of esters used in hormonal replacement therapy (HRT) in males during andropause.
Concerning hypogonadal men, who undergo andropause, testosterone supplementation has beneficial effects on mood, self esteem, and sexual desire.
Testosterone replacement therapy (TRT) has positive, beneficial effects on depression, anemia, metabolic syndrome, obesity, sarcopenia, osteopenia and fatigue.
It improves insulin resistance, physical strength, libido, bone mineral density and red blood cell count.
Testosterone application has shown that a single administration of 100mg TU in eugonadal males, results in supraphysiological serum testosterone levels, resulting in minor mood changes.
On the contrary, hypogonadal males who undergo HRT have no detectable-to limited changes in behavior.

The current literature on AAS usage suggests that some users develop episodes of insomnia, aggression (physical and verbal), irritability, anxiety, neurosis, mood swings-emotional instability, hypomania, manic episodes, depression and rarely phychosis-missconcemptions.
However, AAS abusers expose themselves to extreme higher doses, that quite common is referred as stacking cycles of different substances.
What is most important, is to evaluate the psychiatric background of those users, being able to identify if they had a poor genetic predisposition and mental illness history, before they even begun AAS use.
We conclude that each person reacts different under same circumstances, depending on his character, temper, or level of education.
Besides the genetic predisposition of the user the extent of neurotoxicity of PED’s/AAS also varies with the duration, dosage of abuse, concurrent organic diseases, use of other medications and neurotoxic chemicals, such as ethanol or narcotics.

Other drugs that belong to the class of CNS stimulants (ephedrine HCL, clenbuterol HCL, methyloxanthines, amphetamines), as soon as they are discontinued, rebound effect is more likely to occur.
It is a similar case to a hangover, resulting from alcohol abuse, or withdrawal symptoms of cocaine. Remarkably, it was narcolepsy to which amphetamines were manufactured.
Therefore, we could make the assumption that amphetamines, ephedrine alkaloids, methyloxanthines, or even β2 agonists are highly addictive too, when they are ceased abruptly. Another class of narcotics, acting as potent painkillers, has a highly addictive effect on brain’s chemistry.
Codeine is an opioid, which belongs to the same family with heroin.
Nubain was a widely used pain killer among professional athletes and there are rumors that this kind of drug was the reason that IFBB Pro, Paul De Mayo was pronounced dead at the age of 38.